Knee pain is the most common pain reported in runners and no one has contributed more to our understanding of this pathology than Irene Davis.  I’m a huge fan of researchers that really sink their teeth into a topic and doggedly work to methodically shed more and more light on the subject.  Dr. Davis is one of those rare individuals.  Working out of the Gait Lab at the University of Delaware, Davis started exploring the biomechanics of the knee in the mid-90s, and has a formidable list of publications that numbers well over 40.  Recently, she moved on to the Spaulding National Running Center at Harvard University.

One of the common observations of several studies on patellofemoral pain (PFP) has been that weakness of the hip abductors and external rotators is correlated with, and also predicts PFP.  The solution to the problem then seems to be very straightforward…strengthen the muscles that are weak in controlling the valgus knee during gait and all will be splendid.  Indeed, were the findings in some studies, but others were less promising.  What could be the missing variables?

Last year, an elegant study co-authored by Davis indicated that perhaps the solution is as much related to software as it is to hardware.  Brian Noehren, et al, demonstrated one of the most impressive effects on chronic anterior knee pain in runners ever published.  And they did it using gait re-training without strength training.  They took a small cohort (n=10) of runners (at least 6 mi/week, avg of 16 mi) who had at least 4/10 pain in the anterior knee with running.  The average chronicity was 75 months!!  They did a gait analysis as well as single leg squat, and measured kinematics including contralateral pelvic drop, peak hip adduction and internal rotation.  They also measured vertical impact forces.

Intervention was verbal coaching while running in 8, 30 minute sessions on a force plate treadmill and with live gait analysis.  As the runners implemented the coaching cues, they got real-time feedback via the gait analysis software which showed a representation of their peak hip adduction.  After 2 weeks, pain was reduced by 86%.  On follow up one month later, ALL WERE RUNNING PAINFREE!  For more details, here’s a link to that study.

Here are the 3 verbal cues the coaches used to help the runners change their gait:

Granted, your patients won’t have the benefit of the biofeedback equipment these guys used, but I have seen a lot of benefit in my patients over the past year when implementing these verbal cues in runners with PFP.  As to the strengthening protocols and proprioceptive training that clinicians and trainers can also implement to do a thorough job of rehabbing runners, check the video tutorials at MyRehabExercise.com.  Below you can see a video sample of exercises that I commonly use to correct the valgus collapse of the leg in the gait cycle. 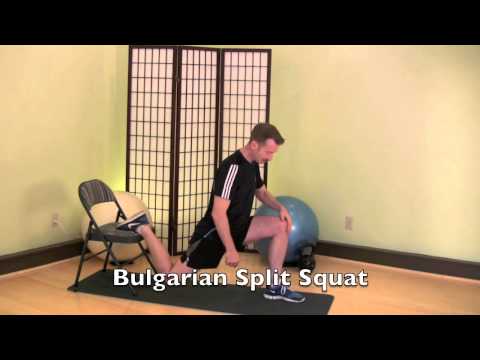 Dr. Irene Davis doesn’t get out on the speaking circuit much, but if you want to catch her live, Dr. Glen Harris and MSK+ Seminars are hosting her in Toronto on November 5-6, 2011.  I highly recommend running doctors take advantage of this opportunity to learn from one of the icons of running research.  Click on the link to get information about registering, Dr. Davis’ bio and the course overview are below.

Dr. Davis received her Bachelors degree in Exercise Science from the University of Massachusetts, and in Physical Therapy from the University of Florida.  She earned her Masters degree in Biomechanics from the University of Virginia, and her PhD in Biomechanics from Pennsylvania State University.  Over the past 20 years, she was a Professor in Physical Therapy and Director of the Running Injury Lab at the University of Delaware.  In addition, she was the Director of Research for Drayer Physical Therapy Institute.  During this time, Dr. Davis has been studying the relationship between lower extremity structure, mechanics and injury in runners. Dr. Davis has recently accepted a position in the Department of Physical Medicine and Rehabilitation at Harvard Medical School to develop and direct the Spaulding National Running Center.  Her current areas of study include mechanical factors in tibial stress fractures and patellofemoral disorders along with the effect of physical therapy interventions such as gait retraining. She is interested in the mechanics of barefoot running and its effect on injury rates, and is a barefoot runner herself.  She has received funding from the Department of Defense, Army Research Office and National Institutes of Health to support her research related to stress fractures.  She serves as a consultant for patients with lower extremity problems related to overuse.  Dr. Davis has given nearly 300 lectures both nationally and internationally and authored nearly 100 publications on the topic of lower extremity mechanics during running. She has been active professionally in the American Physical Therapy Association, the American Society of Biomechanics, and International Society of Biomechanics. She is also a Fellow of the American College of Sports Medicine and a Catherine Worthingham Fellow of the American Physical Therapy Association.  She is currently the Past-President of the American Society of Biomechanics. She has organized and coordinated national research retreats on topics of the foot and ankle, anterior cruciate ligament injuries and patellofemoral pain syndrome. She has been featured on ABC World News Tonight, Good Morning America, Discovery, the New York Times, the Wall Street Journal, Parade and Time Magazine.
Course Overview
This is a 2-day course on the evaluation and treatment of the injured runner.  Day one will focus on assessment.  We will cover normal abnormal alignment and structure.  In addition, normal and abnormal running mechanics will be presented.  There will hands on laboratories on lower quarter assessment, as well as gait analysis in order to reinforce these principles.  We will also cover common running related injuries and review research studies providing evidence for the relationship between structure, mechanics and injury.  We will end the day with a discussion of the development of a clinical hypothesis upon which to base a treatment approach.
On day 2, we will focus on treatment of the injured runner. This will include barefoot/minimal footwear running.  We will discuss prescription of stock orthotic devices (we will not be addressing custom orthoses in this course). We will also cover strengthening and flexibility exercises, with lab time provided to practice these therapeutic approaches.  We will then discuss gait retraining, followed by a lab to practice these techniques.  The course will end with a series of case studies.
0

More Changes to the Structure of MyRehabExercise.com